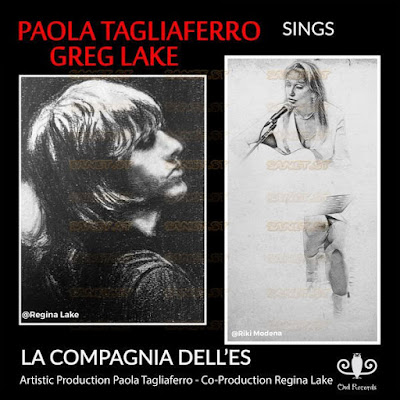 The genesis of this album is a story of friendship and respect between artists. Paola Tagliaferro met Greg Lake and his wife, Regina, late in 2012. Strong ties were forged between the couple and Paola, which continued with Regina after the sad death of Greg Lake in late 2016. In 2017, Paola decided to create a musical tribute to Greg Lake called "Art in Progress Event in Memory of Greg Lake". To carry out this project, she asked high level musicians to join her. The formation thus constituted took the name of La Compagnia dell'Es. This band includes guitarist and sound engineer Pier Gonella (also member of Vanexa, Mastercastle and Necrodeath), the duo Enten Hitti, which is specialized in the use of old instruments and has its own musical career (and which even had the honor of a short review in this blog!), as well as the harpist Vincenzo Zitello considered as a reference in the matter and having collaborated extensively in the early eighties with our Breton bard Alan Stivell. Paola Tagliaferro is a complete artist who has worked in dance, painting and music including experimental music. She has many musical collaborations (recently with Max Marchini, Bernardo Lanzetti but also with Peter Sinfield, the former lyricist of King Crimson) and has four recent albums to her credit : Linee dell'Anima in 2007, Chrysalis in 2009, Milioni di Lune in 2012 and Fabulae in 2018. Besides being a very beautiful woman (I still have the right to say it!), she has a musical path more than respectable. All these reasons to let you know these musicians better but also to understand that we are not with amateurs. After several performances by Paola and La Compagnia dell'Es honoring Greg Lake through the "Art in Progress Event Tour in Memory of Greg Lake", Regina Lake asked Paola to record an album featuring part of the songs performed on stage. Of course, Paola’s voice, really very beautiful and powerful when necessary (cf. "Epitaph"), cannot compete with the deep and enveloping voice of Greg Lake. It is therefore on another ground that we must go to gauge this album. It’s probably the reason why Regina Lake wanted to provide advices on the spirit in which each track could be played respecting Greg’s intentions. And it’s really the points of interest of these covers. Their interpretation reveals a form of purity and stringency that related to a collection of "Greg Lake'songs naked". The other highlight of this album is to give a unity of tone to these ten (eleven) songs linked together by what seems a sort of evidence, resulting in a pleasant listening homogeneity. The proof? All the Greg Lake’s best songs are gathered here and yet no one stands out more than any other. From then, everything is a matter of sensitivity and in this mood, I admit to having a strong inclination for "Lucky man" simply for the accuracy of the Paola’s interpretation and for the accompaniment really fine of the band which gives a real “plus” to this touching song, for "Promenade 2" on which Paola hangs her voice to an invisible thread in a nice balancing act, for "Moonchild" because that version further exacerbates, if possible, the infinite delicacy of this song, and finally for "Epitaph/Battlefield" from which there emerges a sadness and a nostalgia that fits wonderfully with this end of the album, La Compagnia dell'Es surpassing itself here to recreate an arrangement that carries and highlights the emphatic (originally) "Epitaph". I admit that I had some apprehension about Paola’s accent and especially about how she would interpret these songs respecting the attacks, phrasing and nuances of Greg. But again, perhaps with Regina’s advices, everything is perfect and right. The last skeptics wondering where the prog is in all this, will listen to "Take a Pebble" and the central performance of Andrea Zanzottera on the piano and then make a jump to tracks 9 and 10 ("Moonchild" and "Epitaph"), which should definitely reassure them. 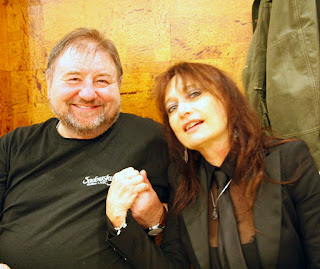 This record confirms, if needed, the talent of Greg Lake as songwriter. Talent that has never been properly recognized, his time with King Crimson having been too short to allow him to impose over time his qualities as a melodist, and his association in ELP having regularly turned to the advantage of Emerson’s sonic exploits to the detriment of his songs which too often passed for mere interludes. As for his solo career, it must be admitted that Greg passed by anyway, which did not allow him to shine his songs unlike a much more opportunistic John Wetton. The aim of this album is therefore achieved: to pay tribute to Greg Lake by highlighting the essence of his compositions. The exercise was not easy, and not won in advance, because when you face to monuments like "Still you turn me on", "Lucky man", "Take a pebble" "Moonchild" or "Epitaph", you must be at your best and not be content to do in the rough. Of course, you will have understood, Paola and La Compagnia dell'Es are at the rendezvous. May they be thanked on behalf of all those who once enjoyed hearing Greg Lake perform one of these beautiful and unforgettable songs. C'est la vie !